This is an official PR announcement from the FOSS community.
Different translations are available here: wiki.freesmartphone.org /CZ /DE /ES /PL

Tuesday, February 15th, 2011 – Despite the recent departure of a former mobile handset manufacturer giant, several developing teams and their users are actually… happily hacking on. With the longterm goal of a fully Free Software platform for embedded systems, the teams of FSO, SHR, QtMoko, Replicant and AndroidOnFreerunner invite others to join and participate in projects which are not driven left and right by the  unpredictable follies of corporate management.

«We have been making a steady progress throughout the years. The major requirement has been a solid, Linux supported hardware, and for that we have been using Openmoko, Palm Pre, N900 and HTC phones – and ambitioned forthcoming projects like Goldelico’s GTA04. All these devices are providing a great development platform for those who seek truly open and independent system for their learning, coding and even professional or commercial use.» — says Dr. Michael Lauer from FSO.

«We believe in another model – proven to be both sustainable and satisfactory – where everybody can contribute their knowledge and learn at the same time, without proprietary code blobs and no closed doors boardroom meetings. This allows us to use existing hardware even when the maker decided to abandon it all together or is not willing to update it anymore. Anybody is able to commit, read, comment on or download the source code.»

The teams invite both users and developers to look at their project pages, the current results, motivations and needs, as well as to join the mailing lists, wikis, forums, IRC rooms or what  not, to chat, listen and eventually contribute in order to create the free and open embedded platform for their devices.

The communities of FSO, SHR, QtMoko, Replicant and Android on Freerunner

Yay, seems like the Steam Client, the Steam Engine, the Steam Games and the 666casino games are comming to Linux, now for real.

There is no official announcement by Valve, yet.
But there are Linux binaries and a Linux launcher script on the valve servers publically available.

The Mac version, which is related to the Linux version (with regard to porting it to OpenGL, Webkit, etc…) and officially announced, is in a closed Beta at the moment.

Check out these articles at Phoronix:

Proof In Steam’s Mac Client Of Linux Support
Yet More Signs Of Valve’s Steam On Linux
There Is No Doubt, Steam Is Coming To Linux! 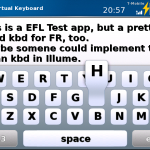 I just found this little EFL-testapp:

It’s an app written by Gustavo Sverzut Barbieri. It’s an Iphone like virtual keyboard. You can find the sourcecode on googlecode..

I had to apply a little change to the code, to get it running on the Freerunner.
I changed lines 206-210 to this:

Maybe someone likes to modify this code and build a real virtural keyboard for SHR out of it?
I hope i could motivate someone, as this would be a really nice keyboard.

Today I decided to try out the picture-viewing-app “neon” [1] [2] on my Freerunner. This app is really amazing! It is pretty fast and provides very cool features like auto rotating images by dimensions, auto rotating window using accelerometers and of course zooming, manual rotating images, slide-show, the basic stuff. And if you use the b_and_w theme it looks pretty elegant.

All in all i can say: I love this app! And therefore i created a ticket in the SHR-Trac to add neon to the SHR-Feed [3].

After a while of using neon I found a few things that couldn’t satisfy my expectations:

Have fun with neon and use fsoraw (e.g. for mokomaze, too):

A few minutes ago mickey released the long-awaited milestone 5.5 of the FreeSmartphone.Org (FSO) smartphone middleware.

Check out the git-commit here: http://git.freesmartphone.org
Big thanks to the whole FSO team for this great piece of software!

Now let’s look forward to the new FSO 2.0 API-Implementation – called cornucopia, which is rewritten in Vala. Vala is a compiled language, which leads to an performance boost in comparison with the FSO 1.0 implementation, which is written in Python.